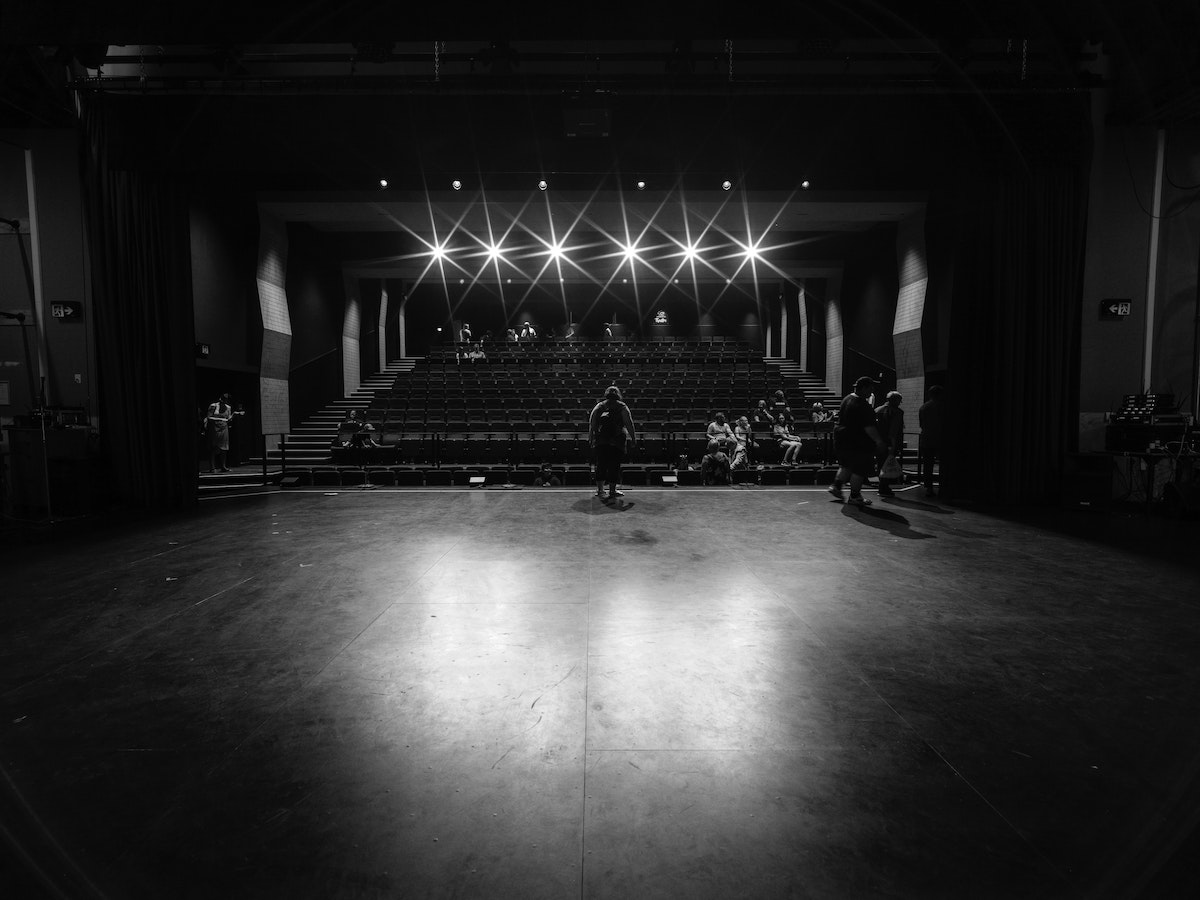 We look forward to bringing the winning short plays to our stage. Following the readings, there will be a wine reception for sponsors, actors, playwrights, jurors and audience. We are also planning a moderated talk back/Q&A between the audience and the playwrights.

The public is invited to attend. There is no registration fee. Donations welcome.

Sponsors will be announced in the program, as well as in the Grist and on our website. Masks and proof of vaccination may be required at the event.

"Brambles" by Bruce Walsh
A – Ed Diamond
B – Michael Weisser

Madison Branch
Madison is a student at Penn State Abington, where she is studying music and theater. She has also studied acting at the American Academy of Dramatic Arts. She is a singer-songwriter and plays the flute and guitar as well. She plans to have a career as a recording artist and actor. She had the privilege of working with the Philips’ Mill Community Association last spring and is thrilled to be joining them again!

J. Edward Diamond
J. Edward Diamond has been an actor for more than 10 years. He studied structured improv at the SAG Conservatory, at HB Studio and with Jeffrey Seiner, appearing in several theater showcases in NYC. He was a cast member of Paul Michael’s NYC New Short Play Festival for two seasons and had roles in four plays. In 2019 he had a significant role in “Hustle, The Musical,” a new musical production in Philadelphia. His most recent theater work was at Phillips’ Mill in the 2022 spring production of “Marriage, What’s Love Got to Do With It?” Ed has acted in film, TV and commercials. A SAG/AFTRA member since 2014, he holds degrees from Columbia University and the University of Rochester. He lives in New Hope, Pennsylvania, with his wife, the artist Mary Malcolm.

Matt DiMarino
Matt DiMarino is an actor and musician in the Philadelphia area. He wears many hats and could pop up anywhere at any time. In his free time, Matt enjoys mushroom foraging and staring at buildings.

Rick Goodwin
Rick Goodwin has participated in the EPC over the past few years as both a playwright and an actor. His play “Bleeding in Black & White” was presented this past summer at the Mill as part of the Premiere Showcase program, and he is a founding member of the nascent New Hope Repertory. His one acts “Socially Active” and “Uncommon Ground” were seen at the Bucks County Playhouse as part of their New Voices series, and his play “Home Smarts” was a finalist at the Manhattan Rep’s spring one-act competition in 2018. Rick has degrees in Theatre and The Oral Interpretation of Literature from Northwestern University, and he is a member of the Dramatists Guild.

Jo Johnson
Jo is excited to be back at the Mill after her appearance in the spring show. She has recently played Mrs. Peacock in “Clue” at PCS, has appeared in “Stop Kiss” at Allens Lane Theater and has a number of roles in the “One Act Bonanza” at Old Academy Players. Regional Stage Management and technical credits can be found in the dusty archives of The Oregon Shakespeare Festival, Trinity Repertory Theater, Alabama Shakespeare Festival and Mill Mountain Playhouse. She completed an MFA in Stage Management from the Professional Theater Training program at UW Milwaukee. She is currently studying acting at HB Studios.

Cecily Laidman
When she’s not embroiled in her day job, making life better for seniors in their homes, Cecily can often be seen or heard or found volunteering for the arts, whether it be supporting arts organizations, singing next to a piano, performing on stage, memorizing lines, or trying to get into the voice-over field. The artistic gene pool from her family of artists gave her no choice but to pursue the artistic avocation. She thoroughly enjoys her involvement with the Phillips’ Mill Drama Committee. She quotes Thomas Merton: “Art enables us to find ourselves and lose ourselves at the same time.” “Hope you experience a little bit of that throughout your life!” she says.

Kevin Nalty
Kevin is a longtime Phillips’ Mill enthusiast, having written and performed in a number of musical theater productions. On occasion, he has been cast as a male. He co-wrote the recent “Great Big Broadway Bamboozle” along with Valerie Eastburn, but he’s already forgotten the role he played. Like a washed-up 1980s star, Kevin was one of the early YouTube “web-lebrities.” As “Nalts,” he has posted more than a thousand videos seen 250 million times (his “opus” is entitled “Farting in Public”). By day, Kevin tackles his most challenging role — that of a passionate ad-man hocking pharmaceuticals.

Laura Scotti
Laura has collaborated in highly acclaimed local, regional and national theatrical productions including: “Time Stands Still” (Kate), “Jake’s Women” (Maggie), “The Apple Tree” (Passionella), “The Fantasticks” (The Mute), “Oklahoma” (Laurie), “Black Patent Leather Shoes” (Becky), “The Dining Room” (Agent, Aggie, Beth, Ellie, Girl, Kate, Meg, Sandra), “A Sondheim Spectacular!” and “This Thing Called Love” (Featured Soloist/Ensemble), and “Disney Cruise Lines” (Entertainer) where she met her husband, Russ, who was Director of Music & Entertainment at that time; together they raised two incredible (and musical) daughters! Throughout the pandemic, Laura was fortunate to participate in virtual play readings for Playwrights Bridge Group and Phillips’ Mill’s Emerging Playwright Competition 2020. In 2021, she again participated in Phillips’ Mill’s Emerging Playwright Competition and performed for New Feather’s Productions’ staged play reading at BCCC’s Performing Arts Center. This year, Laura performed in Rick Goodwin’s acclaimed original play, “Bleeding in Black & White”; it was Laura’s first full onstage production since the start of the pandemic, and she was thrilled to be back on stage with a wonderful cast and crew! Long live the arts!

Tim Wade
Tim Wade has performed in many community theater productions over the years, including several at the Phillips’ Mill Community Association, Village Players of Hatboro and New Hope Repertory Company. He has enjoyed performing in front of an audience since his first taste of it in grade school right through his days as a student at Villanova University, where he performed in a number of plays. Tim has been a resident of Bucks County for 33 years and finally, with their four kids having flown the coop, lives alone with his wife, Janine.

Nancy Vander Zwan
‍Nancy Vander Zwan has enjoyed acting in other Phillips’ Mill Players productions, most recently in the spring show, “Marriage: What’s Love Got to Do With It?” Her play “Northern Lights” was selected among other one acts in last year’s Emerging Voices competition at the Mill. She has appeared in productions at other local theaters, including Old Academy Players, Bryn Athyn Community Theater, and Newtown Arts. Twice, she has performed at Manhattan Repertory Theater in the theater’s national one-act play competition. Nancy’s other creative outlet is in home staging, and she owns StagingCraft home staging services. She considers her wonderful daughter, Jillian, to be her finest production.

P. Michael Weisser
P. Michael Weisser is excited to be returning to the stage at Phillips’ Mill for the readings of this season’s winners of the Emerging Playwright Competition. This will be his third appearance in productions by the theater. Michael has also appeared in the Always Love Lucy Theater production of Thornton Wilder’s “The Wreck of the 5:25,” in the role of Mr. Herbert Hawkins. A Bucks County native and current resident of Buckingham, he is continuing to develop his craft with workshops in acting, scene study and voice with HB Studio in NYC. He has also studied ballroom, country and zydeco dance. He is very much appreciative of the support of his wife, two children and their spouses. His other creative pursuits include photography; woodworking; playing guitar, harmonica and Native American flute; designing and cultivating a moss garden; and spending lots of time with his three wonderful grandkids.

Fran Young
Fran Young has a degree in Theater and English from Northwestern University, where she appeared in numerous productions. She taught English and Theater Arts at Verona High School in New Jersey for 39 years and was director of the VHS theater program. She retired from teaching in 2016 and has since become active in local theater. She is a member of Playwrights’ Bridge and the Mill’s Drama Committee. She has performed in numerous local readings, the Manhattan Repertory Theatre in NYC, and on the Phillips’ Mill stage in 2019 in the EPC readings and 3 Ring Circus. Fran directed and performed in the 2020 Zoom EPC readings. She is happy to be directing and performing in tonight’s presentation with such a wonderful cast.