Our popular ArtTalk series features online conversations with artists, curators, playwrights and more. Join us the fourth Wednesday of the month at 7 p.m.*

ArtTalk is hosted by Laura Womack, President of the Phillips' Mill Community Association. Laura hosted her own syndicated show in Virginia before joining WAMU in Washington, D.C., where she also contributed to NPR. Laura became involved in the arts while living in Singapore, where she worked as a docent and developed an interest in textiles. Today, Laura is a weaver and Board President of Phillips’ Mill.
Production Team: Jen McHugh, executive producer; and Dennis Riley and Jean Mihich, content producers.
‍ 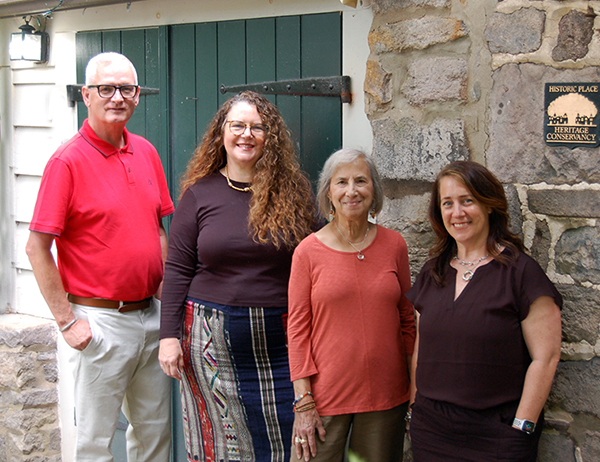 You can view past shows on the Phillips' Mill YouTube channel, or scroll down to find them right here!
‍
*Please check the website for dates and times, particularly if the Wednesday falls before a holiday.

The team at ArtTalk is taking a winter break in December. We'll be back soon.

We at ArtTalk hope to continue to grow and provide our viewers with interesting content. That includes more on-site interviews, studio tours and in person conversations. This growth requires the purchase of audio and recording equipment. Your financial support of ArtTalk can help make this possible. Click on the button below to make a contribution. We appreciate your continued support!

A Collection of Past Conversations

In this episode of ArtTalk, improvisational artist Annelies van Dommelen discusses the challenges and rewards of working without a plan.

Drama at the Mill

Early records indicate that all the way back in 1921 locals performed Antons Chekhov’s “The Proposal” on the stage at Phillips’ Mill. It’s believed to have been the first play performed at the quaint location in Bucks County, Pa. That was the start of a long tradition of bringing live, community-driven theater to our community. From original musical comedies to cabarets, short plays and impromptu poetry readings, Phillips’ Mill Drama has presented a variety of entertainment while supporting the aspirations of emerging writers, actors, musicians, and other artists.

More than a century later the Drama Committee is still going strong. How exactly has the Drama Committee continued for 100 years? How has it evolved over the years to what it is today and where will it go tomorrow? Valerie Eastburn, Chair of the Mille drama program, and Fran Young, director of the Mill’s EPC readings, will be our guests on the next ArtTalk where we will pull back the curtain and get a peek at what’s next.

Luiz Vilela’s work is highly skilled and he paints beautiful pictures, whether they’re a landscape or a portrait. But there’s something more there. People stop in their tracks and gaze at his work, like "Under Paris Skies" in last year’s show at Phillips’ Mill. He was voted onto Art Talk’s People’s Choice show as a result. Luiz likes to paint from life because he says photos often lie. Luiz tells a story that evolves from moment to moment as he’s painting.

That close time spent with his subjects and of course a lot of work on his skills gives Luiz’s work that striking presence. He says he found his “right place” as an artist when he made a master copy of one of the revered Daniel Garber’s works. He learned that each of Garber’s brushstrokes was exactly right. Luiz has learned to put down his brushstrokes and leave them there.

Luiz Vilela studied architecture at the Federal University of Rio de Janeiro and illustration at Pratt Institute in New York, as well as with Nelson Shanks at Studio Incamminati. Luiz worked at Golden Books and Random House. He’s an award-winning artist who’s exhibited at Phillips’ Mill for many years.

The Next Generation with Alexander Shanks

Alexander Shanks is a classically trained artist in the tradition of his parents, Nelson Shanks and Leona Shanks. He fuses classical methods with contemporary ideas. We’ll talk with him about what that means and how trends in technique affect what we see. Alexander is just back from Italy, where he absorbed inspiration from the classical masters. We’ll find out how he is applying this experience to his work in our modern context.

Art museums are often academic institutions, presenting art from a Euro-American canonical perspective. But we know that art is personal. What you see in a piece of art is influenced by what you’ve already seen, what you’ve experienced.

Art institutions that have traditionally displayed art and authoritative analysis for our edification are now asking curators from different backgrounds to design exhibits. And they’re asking visitors what they think about the works on display. Rather than a lesson in art history, it’s a conversation.

Our own Michener Art Museum has recently mounted such a show called (re)Frame: Community Perspectives on the Michener’s Art Collection. Curators with multiple social and environmental viewpoints have selected familiar works and shared their personal interpretations.

But what does this mean for the role of the museum as educator? And how will it affect our experience as art lovers?

Join our conversation about the exhibit with Dr. Laura Igoe, Chief Curator, and Joshua Lessard, Director of Exhibitions, as well as hear from some of the guest curators.

A Look Back at the Work by Katharine Steele Renninger

Phillips’ Mill is synonymous with the Pennsylvania Impressionists. We were their home base, even as they showed nationally. But our 93 year history includes many other artists and artistic styles. One artist who was integral to our arts community was Katharine Steele Renninger. In contrast to the Impressionists who documented the beautiful landscape, Renninger was a realist who focused on the everyday objects of Bucks County life, things like baby carriages… or Windsor chairs… or even the details of a staircase. Katharine’s work is spare and elegant. She saw the patterns of line and light in the quotidian. Her paintings are as much of a paean to Bucks County living as any of our painters’.

Katharine’s work has been compared to important American Modernists, such as Charles Sheeler, Charles Demuth and Edward Hopper. She was highly decorated, winning prizes at the American Academy of Arts and Letters and the Woodmere Art Museum. In 1975, she  was named Distinguished Pennsylvania Artist. She was also instrumental in founding the Michener Art Museum.

Stories of Place - The Watercolors of Jane Ramsey

Jane Ramsey’s life and work are steeped in Bucks County. She grew up in Lumberville along the Delaware River, where she carried a sketchbook from an early age. Her family went on Sunday drives to visit her father’s favorite barns. Jane is still visiting farms, but she stops to paint them now.

Jane’s watercolors of our rural landscape are informed by a lifetime of observation and sketching — what she calls “memory banking.” Now she can compose a swirling field of winterized grass or a cloudy expanse of sky from memory. Still, she’s frequently to be found en plein air, lovingly detailing the places where generations of farmers have tended the land. We’ll look at her work and hear about the people and places she’s encountered making it.

Jane is Vice President of the Arts & Cultural Council of Bucks County.

Paul Gratz and the Work of Forgotten Modernist Peter Miller

Prominent Gallerist Paul Gratz of Gratz Gallery and Conservation Studio in Doylestown has rediscovered the works of painter Peter Miller, an American Modernist. Miller was a wealthy heiress (born Henrietta Myers) and a spiritualist who painted for the love of art rather than ambition. Even so she had notable success, her colorful works having showed at the prestigious Julien Levy Gallery in New York. Her influences were Joan Miro, whom she knew and collected, and Arthur Carles, with whom she studied at the Pennsylvania Academy of Fine Art. She traveled widely and knew the most prominent artists of her time, including Picasso, Matisse, Calder and Ernst. Miller divided her time between Pennsylvania and New Mexico, where she was influenced by friends on the Tewa Pueblo.

We’ll talk about Miller’s fascinating life and works with Paul Gratz. Miller’s work was mostly forgotten until Gratz had the opportunity to buy the paintings remaining in her estate. The work needed extensive conservation, some of it having been stored in a barn. Gratz is a professional conservator. He was able to do the work during the pandemic. There’s now a book and an exhibition opening at the Gratz Gallery on April 23.

Paul Gratz is the owner and head conservator of Gratz Gallery and Conservation Studio. His formal training began at the Pennsylvania Academy of the Fine Arts. Paul continued to hone his ability through apprenticeships with a number of the nation’s most revered conservators, including Gustav Berger, a recognized art conservation pioneer. Gratz is an authority on work by the New Hope Circle of painters. Today, he leads a staff of skilled conservators at the Gratz Conservation Studio, which is housed next to the gallery and is open for private tours.